Today, January 20, 2017, we inaugurate Soulcraft Musings, a new offering from Animas Valley Institute (see below). This is the same day America inaugurates a new president, a cultural upheaval currently mobilizing thousands of response teams worldwide. On this day we commence our humble project of Soulcraft Musings in support of the deepening, diversification, and flourishing of all life. At this time in the world, may we all inaugurate actions and projects that collectively give birth to a life-enhancing society.

The journey of descent to soul has largely been forgotten in mainstream culture, but there is nothing more essential in the world today. The experiential encounter with soul is the key element in the initiatory journey that culminates in true adulthood. And true adults — visionary artisans — are the generators of the most creative and effective actions in defense of all life and in the renaissance and evolution of generative human cultures.

The encounter with soul is not a weekend workshop but an unfolding journey over many months or years. Harvesting its fruit and feeding the world with its bounty plays out over the rest of one’s life. Every day holds opportunities for each of us to prepare for the journey to the underworld of soul, or, once we have embarked upon the journey, to take our next steps, or to gather its mystical treasures and hone them into practical shapes, or to fashion never-before-seen delivery systems for carrying these gifts to the Earth community.

We, at Animas Valley Institute, would like to gift you with this weekly email of trail markers (cairns) on the journey to soul. These Soulcraft Musings, although each only a couple minutes of reading, will be, we trust, valuable guidelines and support on your journey. Each includes references for further reading, study, and practice. And each features a resonant image and poem.

The central theme that ties together all the Musings is, of course, soul and the human encounter with soul. But even the original depth meaning of the word soul has been lost to the modern mind. What we at Animas mean when we speak or write about soul is not what you’ll find in contemporary religious, spiritual, philosophical, or psychological traditions or in everyday conversation. We’ll explore these and many other fundamentals and principles in Soulcraft Musings.

In wildness and wonder, 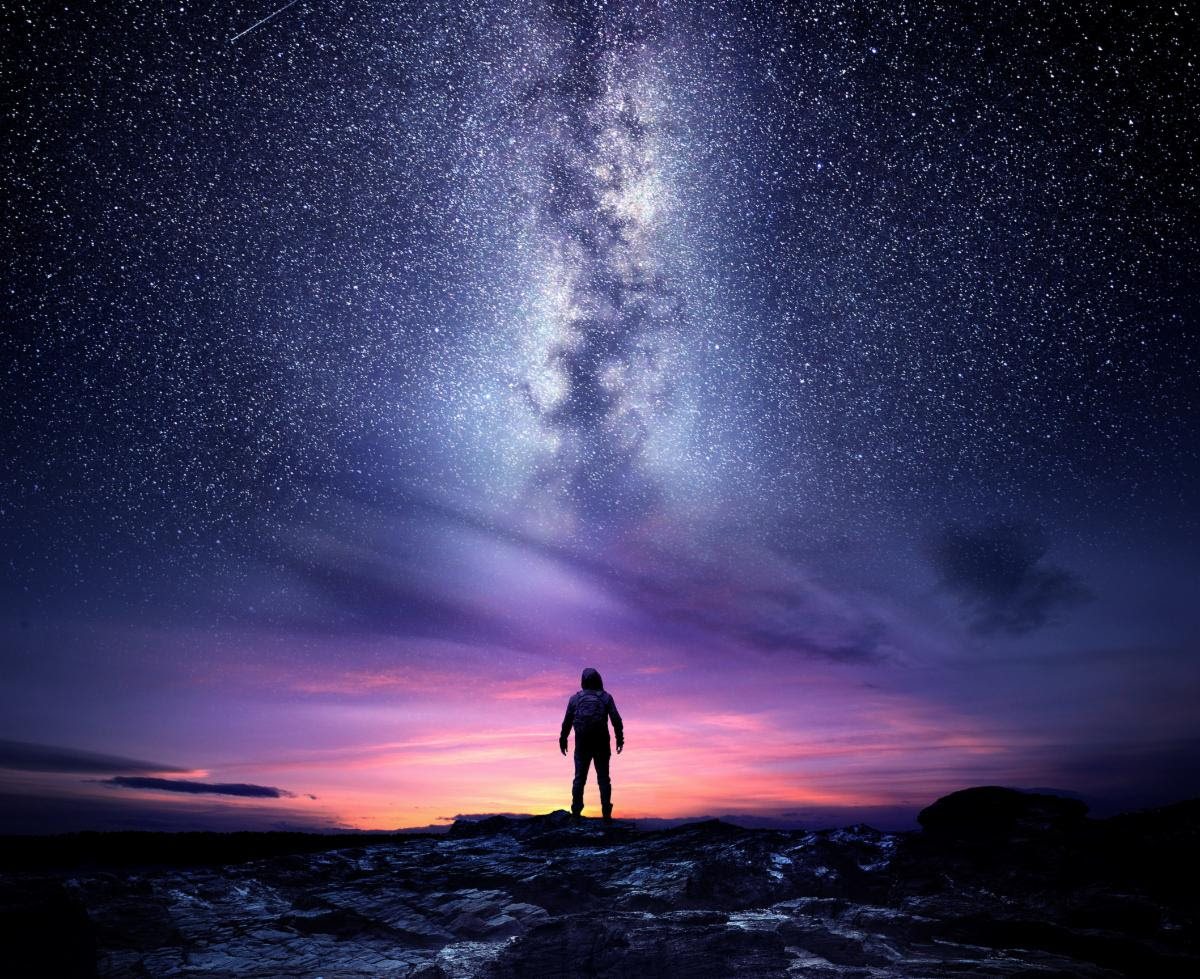 This is the eighth and final part of a Musing series on Thomas Berry’s seminal and worldview-shifting concept of “inscendence,” a term he invented while writing The Dream of the Earth. Inscendence, he told us, is “the descent into our pre-rational, our instinctive resources.” It is our human way of connecting with “revelatory dream experience,” “vision,” our own “inner shaping tendencies,” “the numinous powers of the phenomenal world,” and the “cosmic mystery.”

All the earlier topics in this Musing series — Thomas Berry’s ideas on inscendence, revelation, genetics, and the “spontaneities within us” — form my basis for concluding that genetic coding, as biologists mean this phrase, is only one aspect (the microbiological aspect) of how a DNA-based creature comes to exhibit the spontaneities that it does. But the spontaneities themselves are the primary phenomenon of interest when we speak about the way nature designed a living thing to be and act, while the phenomenon of genes is one part of Western science’s explanation of how these spontaneities are passed from one generation to the next.

But genes are, in any case, only one part of this explanation. More generally, our human spontaneities are what they are as a consequence of the place we have in Earth’s ecology. We take the form we do and have the instincts and spontaneities we have because of the place we inhabit, our ecological niche. And, like every other member of the Earth community, our niche shifts and adjusts — or at least ought to — in relation to the activities of all other members of the Earth community. It’s not simply or primarily about genes.

The idea that a thing is what it is by virtue of its relationship to all other things is at least as old as the Buddha’s 500 B.C.E. principle of dependent co-arising, or interdependence, and as modern as the notion, from general systems theory, of mutual causality. [1] As Thomas himself declared, “Nothing is itself without everything else.” [2] And: “Each being of the planet is profoundly implicated in the existence and functioning of every other being of the planet.” [3]

Place itself has a profound and primary effect on the nature of things. “Place” is not a mere description devoid of explanatory value. A thing is what it is and takes the shape that it does as a function of its place, role, or niche within its environment. A thing’s place is the totality of relationships it has with all other things. Each environment is what it is by virtue of all the things in that environment and their relationships to one another.

How does our ecological place or niche determine our human form and spontaneities? Through relationship: our interactions with all the other creatures, plants, waters, air, and landforms. And these relationships gradually shift due to our behavior vis-à-vis all these others and theirs in relation to us. We adjust and adapt our behavior as a function of what we perceive, learn, need, value, and intend.

In recent decades, even the explanatory value of the gene has been significantly amended due to the intriguing wrinkle from the relatively new field of epigenetics: The expression or manifestation of a gene is now known to depend upon microbiological factors influenced by environmental and physiological events and processes. In other words, the shaping effect a gene has on physiological form or behavior depends upon the presence and action of other elements in the environment. Everything is what it is by virtue of its relationship to everything else. Even the genetic manifestation of identical twins begins to diverge no later than birth.

I want to propose here that “genetic coding” is not the best way to identify what contrasts with our cultural coding; a clearer and more inclusive phrase, I believe, would be our “nature coding.” By nature coding I refer to the ways in which our ecological niche (our place) and our own unconscious psyches influence our human form and tendencies. Our nature coding is how the Earth is dreaming us, even how the universe is doing so, independent of any conscious beliefs we have about ourselves.

Another way of referring to the influences of place and psyche, an alternative to nature coding, is soul. Our place, after all, is the soul’s ecological manifestation, and psyche is the soul’s psychological manifestation. Or said another way: Place or niche is how we experience the soul ecologically; numinous image or core identity (our sense of our true self) is how we experience the soul psychologically.

Our genetic coding is part of how our nature coding operates, or one means by which our souls function.

With this concept of nature coding, I feel we can restate one of Thomas’ central ideas, as follows:

If we substitute the word soul or the phrase nature coding whenever Thomas wrote of “gene,” “genetic endowment,” or “genetic coding,” we might obtain a more accurate and useful reading.

Human Development from the Perspective of Inscendence

Human development is our most fundamental need in our current global mission, the Great Work of reinventing the human and relearning to embrace the dream of the Earth.

If reinventing the human depends upon inscendence, as Thomas told us, then human development must be a primary focus of our efforts at cultural transformation, for only developmentally mature individuals are able to experience inscendence and benefit from it. Inscendence is as psychospiritually challenging and risky as it is ecstatic and necessary for maturation beyond psychological adolescence. [4] Inscendence is the path to soul encounter. This encounter is what bestows the guiding vision for a lifetime, the mythopoetic template for personally belonging to the world in the way that the Earth and one’s soul desire. Belonging to the world in this way is to contribute to the evolution and sustainability of one’s culture — the sure sign of a true adult.

My estimate is that no more than 10% of people in current Western and Westernized societies ever reach true adulthood.

Although human development is no more urgent a need than the infrastructural societal changes discussed earlier in this Musing series, it is our most fundamental need. The cultivation of authentic adulthood and genuine elderhood goes far beyond any modifications in how we generate energy or conduct business, agriculture, and politics. We need contemporary cultural codings that allow our full humanity to once again blossom. We need new, widely adopted practices for parenting children, educating them to become full members of not only a family and culture, but, equally important, of the Earth community as it exists in their particular bioregion. We require new, much more effective ways of supporting teenagers to uncover and embody their most authentic selves and, when ready, to learn the arts of inscendence so that they might explore the mysteries of nature and psyche and eventually, with good fortune, receive a vision or dream revealing their unique place, role, or niche in the Earth community. By embodying this role, they become authentic adults, deeply imaginative artisans of cultural regeneration and evolution.

We also need in each society a significant number of mature adults who have been called by the spontaneities within them to serve as guides to the initiatory rituals of inscendence. [5]

And we need true elders, like Thomas Berry, to oversee all these endeavors as we make our way into the very uncertain and ominous future.

Despite our dire times, Thomas was hopeful to the end about our prospects. He derived his hope from the story of the universe itself:

In the immense story of the universe, that so many of these dangerous moments have been navigated successfully is some indication that the universe is for us rather than against us. We need only summon these forces to our support in order to succeed. Although the human challenge to these purposes must never be underestimated, it is difficult to believe that the larger purposes of the universe or of the planet Earth will ultimately be thwarted.” [6]

Adapted from: Bill Plotkin, “Inscendence: The Key to the Great Work of Our Time (A Soulcentric View of Thomas Berry’s Work)” in Thomas Berry, Dreamer of the Earth: The Spiritual Ecology of the Father of Environmentalism, edited by Ervin Laszlo and Allan Combs, Inner Traditions, 2011, pp. 42 – 71.

[4] Bill Plotkin, Nature and the Human Soul, Cultivating Wholeness and Community in a Fragmented World (Novato, CA: New World Library, 2008) describes the eight life stages of ecocentric/soulcentric human development. The Journey of Soul Initiation: A Field Guide for Visionaries, Evolutionaries, and Revolutionaries (Novato, CA: New World Library, 2021) focuses specifically on the descent to soul, which is primarily associated with the fourth of the eight life stages.

[5] Training people who have been called by soul to the work of soul-initiation guiding is at the core of our mission at Animas Valley Institute. We call this training program the Soulcraft Apprenticeship and Initiation Process (SAIP). See https://www.animas.org/training/soulcraft-apprenticeship-initiation-program/

As of May 2022, our cancellation policies & procedures have changed.